We hope you are well this week as we come to the end of February. Our news is as follows

END_OF_DOCUMENT_TOKEN_TO_BE_REPLACED

Two actors from the Abbey Theatre visited 5th and 6th classes today to perform the play ‘Me, Mollser’. The play was about a young girl from 1916 who came to visit our school. She began by telling us all about her life during the Dublin Lockout and the 1916 Rising. END_OF_DOCUMENT_TOKEN_TO_BE_REPLACED

We were looking at road signs and road safety on our way to the park.  In the park the children played with the clock as we had been learning about time in school.

To celebrate Grandparents Day and Catholic Schools Week, 5th class played bingo and have also been learning the card game 45. We found that both games are so much fun.  We found some of the Bingo lingo, very funny to listen to. We never thought we’d be talking about two little ducks, walking sticks, legs eleven, clickety-click and unlucky for some during playtime!! 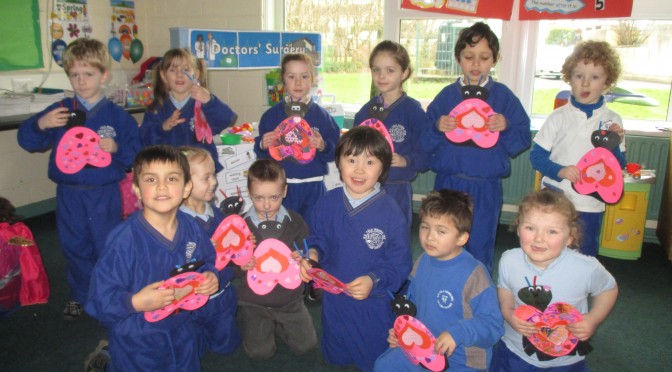 Junior Infants were feeling the love for Valentine’s Day when they wrote a special message to their loved ones on their beautifully decorated ‘Love Bugs’.